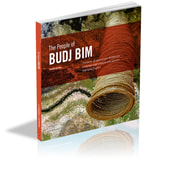 This updated and revised Second Edition covers the story of Australia's first Indigenous community-led nomination bid for World Heritage listing of their cultural landscape. In 2019, the Gunditjmara were recognised through World Heritage listing for their demonstrated technological ingenuity in engineering water flows and managing food resources across the Budj Bim lava flows in south-west Victoria over many millenia.

In 2009, carbon dating had found that a fishtrap system constructed by the Gunditjmara is an incredible 6,600 years old. A permanent supply of freshwater and abundant eels, fish and water plants meant that the Gunditjmara led a settled life there – an experience without parallel among Aboriginal societies and landscapes in Australia.

In The People of Budj Bim, the Gunditjmara with Gib Wettenhall bring to life the amazing, unknown history of their traditional eel aquaculture systems and associated stone house settlements, once scattered throughout the lakes, streams and ponds that pockmark the Budj Bim lava flow from peak to sea. At first contact, the rough and broken ground of the lava flow acted as a fortress. It became the setting for what Robbery Under Armsauthor, Rolf Boldrewood, called the Eumeralla War, a six year battle fought by Gunditjmara clans against squatters taking over their land.

The fighting Gunditjmara never gave up their connection to Country. In 2007, and again in 2011, they won Native Title to much of their land and with World Heritage recognition are now stepping up in healing Country and culture. And, in the process, the Gunditjmara are positively healing their people from the trauma of the past and restoring their confidence and identity.

You can buy the book online for  $25 via the em PRESS Publishing online SHOP
Visit: https://www.empresspublishing.com.au/shop-online.html

ISBN 978-0-9557778-2-0
"This clearly written, enlightening booklet is not only an excellent teaching tool
but also a must-read for anyone who wants the full picture on the history of the Western District."
Review  in The Age by Fiona Capp of the First Edition.
The book also received a glowing review from education magazine Shine – see Reviews in full on this menu


The full colour 92 page  book with images throughout provides an accessible, plain English introduction to the World Heritage listed Budj Bim cultural landscape and its Indigenous history. It is aimed at tourists, tour leaders, school groups, the community and the public in general. Funding for research, writing and publishing of the Second Edition by em  PRESS in June 2022 was provided by the Gunditj Mirring Traditional Owners Aboriginal Corporation.

​See full reviews by clicking on Reviews.  Go to Bookshops to find where you can buy The People of Budj Bim.
​ 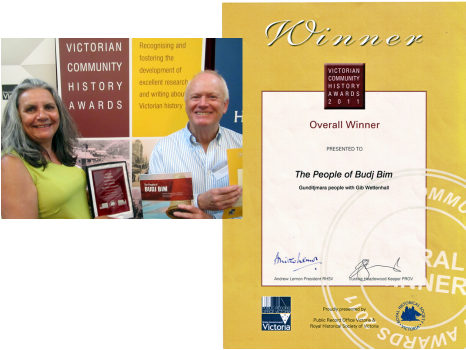 Presented by the Royal Historical Society and the Public Record Office of Victoria, the judges' citation for the award reads:

"This wonderful exposition about the Gunditjmara people and their country... is well-researched, clearly presented and shows a profound knowledge and understanding of the natural cultural and historical elements that made the landscape and its people in their many manifestations through to present times.

"This publication is a superb community history."